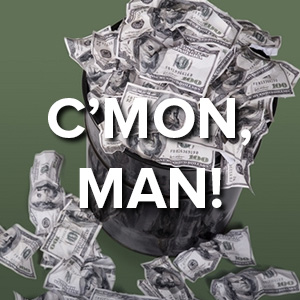 Do you like extreme and/or funny stories about people wasting money? If so, you should try my job.

Conversations with business owners, business development professionals, and sales managers over the past couple of months are leading me to believe that an inconceivably high percentage of businesses are consistently throwing away gobs of money.

Why Does Money Keep Getting Wasted?

There are a number of reasons for this phenomenon, but a couple stick out to me:

I understand and experience all three of these reasons on a daily basis. I can be slow to change, prone to laziness, and hesitant to trust. So I get it. But still…

Are We Forced To Keep Wasting Money?

I believe that I should be able to determine the best marketing investment by measuring the return on every investment I make, and then making quantitative comparisons.

Now I know that some things are hard to quantify, some comparisons are hard to judge, and sometimes the goals are different.

But I also know that not everything is that way.

Many things are easy to quantify, many comparisons present an obvious winner, and many tactics have the exact same goals.

Why Does This Money Keeping Going Down The Drain?

So my mind is blown when I talk to decision makers who are telling me that they are:

Look, if you’re not shooting at goals, how could you ever be successful? You wouldn’t know.

Similarly, if you’re not measuring your progress against those goals, you couldn’t know if you were successful.

So that’s one frustration – the people who either don’t have goals or don’t have a system in place to measure success.

The second frustration is the one that is simultaneously more frustrating and more amusing to me. It’s the folks who have goals, track success, are consistently falling short, but won’t make a change.

Because change is hard, people are lazy and risk-averse, and finding a trustworthy solution isn’t easy.

The classic example is the sales manager who keeps his team cold-calling, email-blasting, direct-mailing, and radio-commercialing, even after repeated proof that it’s not working.

“Maybe it’s an issue of volume, not a broken system…”

Yeah, or maybe everyone else is living in the 21st century.

I’m picking on those methods because they’re growing in two areas – they’re growing more expensive and less effective. But my wrath is not reserved for those tactics specifically, but for any system that isn’t measured and improved.

Maybe this is just me and derives from a lifetime of competitive athletics and keeping score, but – if we’re not measuring, why are we trying?

It’s Time To Be Bold And, Dare I Say, Grow

Look Mr. Cold-Calling Sales Guy, I know that you’ve done the same thing for a long time, I know that it used to work well enough, and I know that change is hard.

I know that change equals risk, I know that something new could flop worse than a soccer player (there’s a shot across the bow!), and I know that you could look dumber than Mark Sanchez with his infamous Butt Fumble.

But could we together, because I’m in the same hesitant, lazy boat, step out on the water and try something new?

If it fails, it fails and we’ll keep trying, but let’s stop pouring money into marketing investments that aren’t measured or don’t pay off.

The man behind The Sales Lion and River Pools & Spas, Marcus Sheridan is also an electrifying speaker. When he spoke at Inbound (2013 inbound marketing conference put on by HubSpot), Marcus shared two favorite follow-up questions that he uses during his sales process. When a prospect shares information about their current or prospective marketing investments, Marcus likes to ask:

I share these questions because they do a tremendous job of framing the conversation around the immediate impact, the long-term effects, and the value of measuring ROI.

Takeaway: whether you’re leading internal discussions, facilitating organizational change, or you’re engaged in a sales process, I encourage you to point the conversation in the same direction and emphasize the value of measurement.

Conclusion: How Do You Allocate Limited Resources?

Operating under the assumption that your resources are limited, you are tasked with finding the best way to invest those resources.

I challenge you to the following:

There are certain companies who are clearly a step ahead. These 8 companies are closing significantly more sales than ever before, and there is a consistent pattern to their success. Get the insider secrets and free tips to start closing more sales right away.