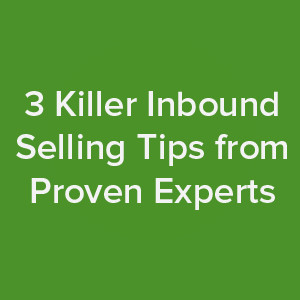 The B2B sales landscape is changing. Today’s buyers are more educated than ever before thanks to the wealth of content that can be found through Google and shared on LinkedIn. It takes an inbound mindset across your organization to compete in this new space.

Here are three great articles from leaders in the inbound selling space who are using the principles of inbound marketing to create stronger connections and utilizing the power of social networks to access decision makers like never before.

Connections matter. Big time. Recent research from Reachable.com shows just how much it impacts your ability to get a callback from a “stranger.” In fact, you’re:

See. It does make a difference. But most sellers don’t know how to leverage their LinkedIn connections nearly as much as they could.

Leveraging 2nd-Level Connections. “There was an organization that I was trying to penetrate. As I looked through the list of active LinkedIn users, I wrote down the names of my 2nd level connections. Then I looked at each of their profiles to find out who my 1st level connection was to these individuals. One was connected to a close friend of mine. As I looked over her bio, I noticed she and my friend had worked together before. When I connected with this 2nd level person via email, I mentioned our mutual friend. She then got me in contact with the right person within her organization.” ~ Bryan K.

Read original: Leveraging LinkedIn Connections
P.S. If you’re interested in stepping up your LinkedIn game, then you need to check out Jill’s awesome eBooks Cracking the LinkedIn Sales Code and LinkedIn Sales Secrets Revealed. Serious quality in these resources.

Loses Due to Lack of Consensus

by S. Anthony Iannarino
Lately I am seeing more and more salespeople lose opportunities because they don’t have the support of the necessary stakeholders. Here’s two ideas to prevent this from putting an opportunity in your loss column.

In some cases they don’t have authority. Even though they have someone with a relatively impressive title and who also happens to be the CEO of the problem, they don’t have the support of the real decision-maker (the person their contact needs to convince).

They struggle to coach their contacts to do a good enough job selling the stakeholder with real authority. The way to find this contact is to ask the question, “Who else are we going to need in order to get this initiative approved?” Some salespeople fear asking this question because they are afraid it will alienate their contact. Not asking the question is far more dangerous. It can cost you your opportunity.

Read original: Losses Due to Lack of Consensus

By now, travelers are so tired of the safety routine which flight attendants are compelled to give at the beginning of every flight. We’ve heard them before and tune out before it even begins. That said, knowing, remembering and understanding what is in that announcement at the right time could be life saving. But, people don’t pay attention because:

So, how did Delta get people to listen in spite of the above? If you’ve seen their videos recently, then you know how. They made the videos funny and thoughtful. They made several of them. Now I find myself watching to see which one it is! These videos also have had thousands of hits on YouTube. Are you kidding me – airline safety announcements going viral!?